I think pickling is good for a relationship. Don’t you? Getting in the mood, enjoying the process, and reveling in the pure satisfaction that comes with good results.

What?! Get your mind out of the gutter! I meant pickling as in canning! Preserving cucumbers in jars with a salty, vinegary brine! 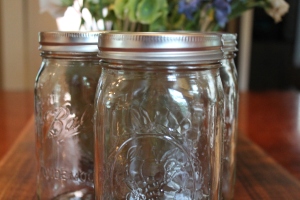 Jay is obsessed with pickles. And by obsessed, I mean he critically assesses the flavor, crunch-factor, spice level, saltiness and just about any other characteristic that a pickle might posses.

To date, the best pickles we’ve both eaten are made just outside of Detroit. McClure’s pickles, the spicy variety to be specific, are as close to perfect as a pickle can be. The fabulously labeled preserved cucumbers are a family recipe. And I think Jay would like to have a briny secret of his own.

So when I expressed interest in learning how to preserve the summer bounty by canning, Jay was 100% on board and his mind went straight to pickles. Dilly, spicy, crunchy pickles.

A couple of weeks ago, we went back to EggPlant Urban Farm Supply in St. Paul for a Sunday afternoon canning class. The class focused on tomatoes, but the same principles apply to pickles. Using a water bath canning method, we learned how to sterilize jars, pack them with picked-at-its-peak summer produce, top them with lids, boil them and wait for the gratifying “ping” noise as the jars seal.

While we’re at it, we decided to try our hand at pickled jalepenos. Jay has childhood memories of the crunchy peppers his best friend’s dad used to make. Every time he buys a jar, what’s inside just doesn’t meet his high expectations.

I’m harvesting a couple of cucumbers a day from the garden, but in order to make a big batch of pickles, we decided to buy a bushel from the farmer’s market. We also picked up fresh dill, along with spices like peppercorns, red pepper flakes and mustard seed. 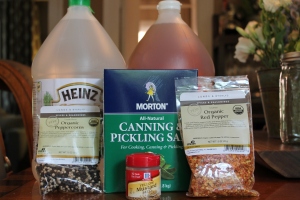 After setting up my biggest stockpot with a steamer basket set inside to simulate the design of an actual canning setup, I quickly realized it was time for a trip to the store. Our jars were too tall to be covered by water once they were in the pot. My beginner’s advice on canning? Just buy the canning pot and jar rack that fits inside. The stainless steel version will set you back about $90, an enamel version is half that. I forked out the cash, once again aware that the beginning of any homesteading effort isn’t about saving money, it’s about experiencing the process and enjoying the tasty products you create.

I prefer to share original recipes with you, but in the case of canning (and to preserve the integrity of Jay’s sure-to-be-famous-but-not-quite-perfected pickle recipe) I’ll defer to the experts. And in doing so, avoid any of you contracting botulism and blaming me for it.

My canning class instructor recommends a delightful blog called Food in Jars because the recipes are tested for safety. We used the posted Garlic Dill Pickle recipe and added some of our own spices, additional hot peppers and cutting our cucumbers into spears instead of slices.

For the jalepenos, we took advantage of the same resource and used this Unfancy Pickled Jalepeno recipe as our starting point. 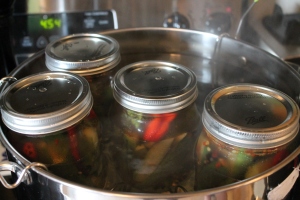 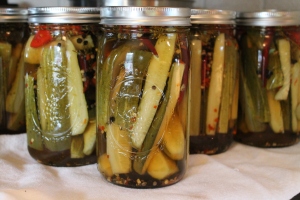 Pickles = amazing flavor, but could still use a little more crunch.