Chickens grow incredibly fast. But they mature slowly at the same time. I’ll explain that contradiction. Today, MaryAnne, Susie Q and Roz are three weeks old. For three weeks, I’ve been adjusting their heat lamp, refilling their food and water containers, and cleaning up poo. Lots of poo. As in, tons of poo.

And they are growing up quickly! Remember what they looked like at just a few days old? They were slight. And fluffy. And fragile. But look at them these days: 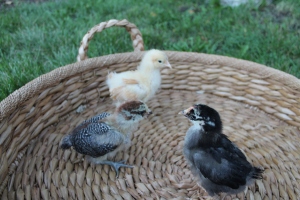 They still have some of that baby fluff. But now, the girls are showing off their fancy tail feathers and stretching out their little wings nonstop. Their tiny chick feet are becoming long, with claws stretching out. They are snacking on grit, small stones which chickens eat to keep their digestive systems moving smoothly (humans: don’t try that). While they used to make sweet, small chirping noises, they now full out squawk in protest when we pick them up (although if you softly pet Roz’s head while you are holding her, she’ll still settle in and close her eyes for a short rest). Jay even built them a roost out of a few backyard sticks so they learn to perch as they will in their outdoor coop in just a few weeks. 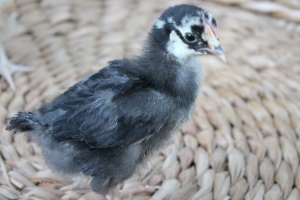 And the social dynamic has changed. Initially, Susie Q was the boss lady of the brooder. But over the course of a couple of weeks, MaryAnne and Roz grew. Susie Q just didn’t. She’s catching up now, but that lack of heft cost her the top spot in the pecking order. 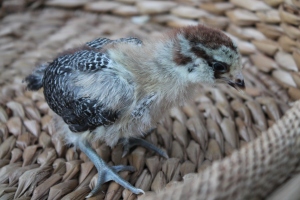 My bet is now on Roz as the flock leader. But MaryAnne flaps her wings in protest if Rozzy gets too full of herself. 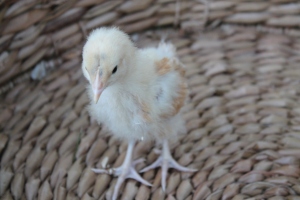 As much as we love getting to know the sparkling personalities of our avian basement dwellers, these hens are here for one reason: eggs. And everyone keeps asking me when these girls are going to start laying. 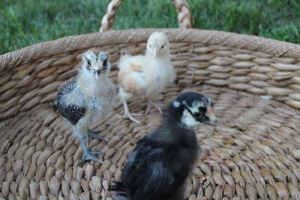 Not for a while, my friends.

You see, it takes about six months for a chick to grow into a pullet (the term for hens who are less than a year old) who will lay eggs. This means that I’ll still be picking up a dozen at the farmer’s market or the co-op until after Christmas!

But I have a feeling that first egg will be worth it. And until then, we’ll just enjoy every day with the girls.

Oh shoot, I have more poo to clean up. 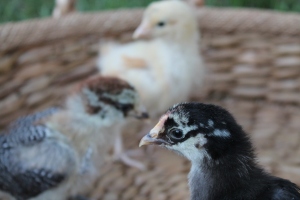