Okay, I’m just going to say it. I have worms. At least a thousand of them. They live in my basement. By the time you finish reading this, I’m pretty darn sure a little part of you will want the same thing.

Because the thing with these worms is, they do magical things. Worms eat what we don’t want and turn it into the perfect plant power food: compost.

This might seem strange, but my worm obsession really got underway while I was anticipating a purchase and watching NHL 36. It was unusually warm spring in Minnesota this year and I started planning my garden early. I was thinking about focusing on squash this summer and deciding where to place my tomatoes. And then I had a flashback to my least favorite part of the planting season: hauling bags of compost. My sandy soil in South Minneapolis needs a little oomph. And so, I go down the street to the garden store. I open the hatch of my car. I lift and stack the bags in the back. I pay for them. Wait, I pay a lot for them. I drive my loot home, unload it, rip open the bags, and distribute their rich contents throughout my beds. I’m exhausted now just thinking about it. And all of that went through my mind just as I threw another bowl of juice pulp into the trash. As sustainable farming evangelist Joel Salatin would say, “Folks, This Ain’t Normal.”

But there was a missing link.

One night, Jay flipped on the show Beyond The Puck on The National Geographic Channel. As the name suggests, it follows a pro-hockey player and his life off the ice. Andrew Ference is a defenseman for the Boston Bruins. He’s a Canadian. In 2011, he was fined $2500 for giving the middle finger to the crowd after he scored a goal. He’s also a worm composter. Jay and I watched Andrew take his daughter to the back door and reveal his worm compost bin to the cameras. He opened it up, checked in on the red wigglers living their wormy life and fed them kitchen scraps that in most households end up wasted.

The missing link is sometimes found in unexpected places.

I was getting myself some worms. 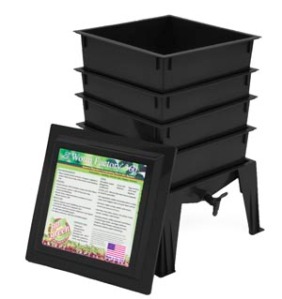 After days of research, I settled on the Worm Factory 360. I ordered the worm bin, a ceramic compost pail to keep on my counter and a thousand red wigglers from Uncle Jim’s Worm Farm. And that day, as I dumped more blitzed, dry bits of organic carrots, apples and greens into my garbage can, I knew things were about to change.

I prepared the worms’ bed with a mixture of shredded newspaper, pumice and coir (coconut fiber). The worms went in and slowly but surely, they started eating through small piles of cooking leftovers (sans meat, dairy and citrus). Coffee grounds, shredded paper, fruit and vegetable leftovers are all fair game. We had a few tense moments at the beginning when about a dozen worms wiggled their way out of the bin and fell to their death on the basement floor. I felt guilty. But their buddies were living the high life in the snack-packed worm bin, so I moved on.

And all of this led to the other morning, when I found myself chopping banana peels. I often buy bunches of bananas. I eat them fresh, but once they are too ripe for my taste, I peel the remaining fruit, break it into pieces and freeze them in baggies. Perfect smoothie ingredient.

I was left with a pile of peels. But the thing is, my worms like their bites small. As in, minced. Makes sense, as they are pretty darn small themselves. 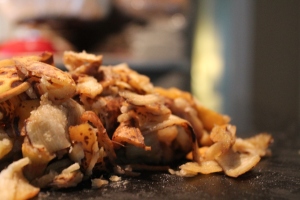 So instead of tossing that mountain of banana peels into the waste bin, I chopped them. I went to the basement. I opened my worm compost bin and checked on my red wigglers living their wormy life. And I fed them the kitchen scraps that in this household, used to end up wasted. 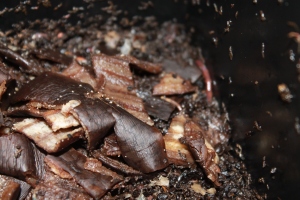