My husband has a new lady in his life. She has long legs. Lots of energy. And of course, she’s young.

Her name is Gracie. And he can’t wait to go on hunting dates with her. 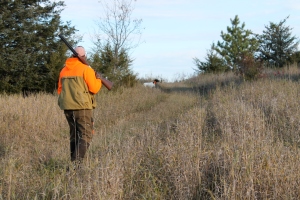 Me. Hockey. Hunting. Among other things, that’s what my husband Jay loves. And as long as I’ve known him, he’s wanted a canine companion to help him find pheasants.

Last October, on one of those last warm fall days, I tagged along with Jay, his buddies and their dogs to a game farm they visit just outside of the Twin Cities. 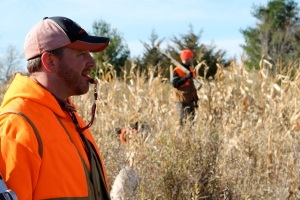 But the guns and the blaze orange will only get you so far. To find a pheasant hiding in the brush, you need a powerful nose. And that only comes on the face of a dog. And while Henry the Westie is unmatched in the business of backyard squirrel flushing, his little legs aren’t fit for the big woods.

So last week, we adopted a twelve-week old German Shorthaired Pointer. Every muscle in her body is constantly exploring everything around her. She’s beside herself with joy upon each new discovery. She’s sweet. And snuggly.

She also cries. A lot. Her teeth are razor sharp. She seems to crave destruction. Her giant paws are like boxing gloves threatening a knock-out. And then there’s the house training. Ugh. Puppies. 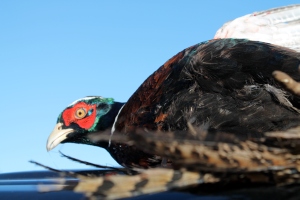 This means one thing for me: more pheasant in the freezer. But don’t worry, I have a plan for that and I’ll share it with you soon.

Right now though, I’ve gotta get Gracie out of the chicken coop.