In An Egg Drought

I’ve learned a very valuable lesson this week. The crime of egg hoarding is clearly punishable by egg withholding. Remember when I told you I was having a hard time parting with my lovely eggs? I just couldn’t let them go. I counted them in their cartons. I prepared them lovingly and (if I do say so myself) perfectly. I just wasn’t ready to give them away.

Clearly, I changed my selfish ways too late. Because now, we’re in an egg drought.

I admit it, I’d become a bit spoiled. The eggs were coming fast and furious. There wasn’t a day that went by where I didn’t gather at least one, often two and sometimes even three eggs out of the nesting boxes. When I finally started placing eggs in packages to share with family and friends, I thought I was following the principles of egg karma. Give some away, more will come to you.

And then the cold came.

As in, it barely broke zero degrees for a week in Minneapolis. And it’s been a full eight days since I’ve seen an egg. Even Henry is wondering when this excessively icy snap will end.

As a lifelong Minnesotan, I grew up thinking this is just the way people live. You bundle up in the winter. The frigid air bites you in the face. It nearly knocks the wind out of you when you turn a corner and are no longer shielded from the elements by a brick building. Your back becomes tense and hunched over the moment you leave your house. That’s just the way things are. Right?

It wasn’t until about ten years ago, when I stumbled across a list of the top ten coldest cities in the continental United States that I realized, no, not everyone lives this way. Because five of the towns listed happen to be in Minnesota.

It really is that cold here.

And lately, it’s been downright brutal.

Just like the rest of us in this frigid, frozen tundra, Susie Q, Maryanne and Roz are hunkering down and just trying to survive.

They venture out of their coop occasionally, but most of their time is spent roosting under the warmth of their heat lamp inside. In the morning, I open their coop door. As usual, they race out one by one and launch their beaks into their feed. Their usual morning excitement quickly wears off, though, as they lift one foot and then the other, preventing them from freezing to the earth. At least, that’s what I’m guessing they’re doing. 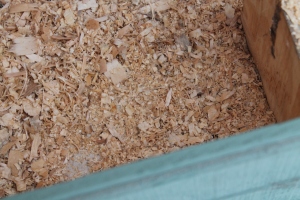 Then it’s back into the coop to warm up. Their nesting boxes? Untouched. Egg laying? Not happening. My breakfasts? Totally disappointing. That’s right people, I actually had to buy eggs at the grocery store.

I can’t say I blame the birds. I wouldn’t want to lay eggs in these conditions either.

I re-assured the ladies. It won’t last forever, I told them. Stick together and we’ll make it through. Just like it does every year, spring will come again.

In the meantime, I’m back to waiting for eggs. And putting on an extra layer of long underwear.

9 thoughts on “In An Egg Drought”