Seize The Last Days of Fall 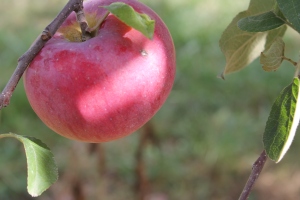 Just because I started picking apples from my backyard tree doesn’t mean I’m going to miss out on a trip to the apple orchard. When I told my mom we planned an afternoon picking apples, enjoying a tractor pulled hayride and choosing the perfect pumpkin, she was immediately transported back to the days when she would take her little girls out for some fall fun. Love those seasonal traditions.

In Minnesota, fall is short lived. We treasure every sunny autumn day when the trees are still full of leaves in bright shades of orange, yellow and red. We know it’s only a matter of time before the cool temperatures turn to downright cold and we take advantage of it.

Jay’s brother Tom and his wife Michele have two fabulously fun girls. Audrey is four and Sofia is three. A few Saturdays ago, all of us ventured out to the orchard to make some memories, people.

After tasting several varieties that were ready for picking, Jay and I decided to go Cortland all the way. The Cortland is a sweet, juicy apple with a lovely balance of tartness. When you cut through the reddish green skin you’ll discover a snow white flesh. Interestingly, they are slow to turn brown so they are just the variety to serve raw in a salad or on a fruit and cheese plate. 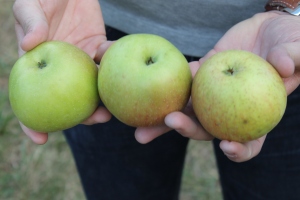 Watching Audrey and Sofia run through the orchard, searching for the perfect apple was nothing but delightful. Jay and Tommy would lift the girls up so they could reach the higher fruit. They insisted on carrying their own bags, no matter how full and heavy they became. 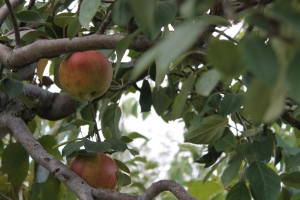 At some point, each of us would spot an apple we were sure was flawless. Lovely shape, bright color, surely sweet and tart on the inside. We’d stretch and reach and weave between the leaves and branches to get our hands around it, only to be sorely disappointed. A worm hole or a soft spot was discovered. The picker let out a groan, opened their hand so the apple would fall to the ground and continue the hunt. We left full of fresh air and with a trunk full of fruit.

But as much as I enjoy the taste of apples, I rarely just grab one and take a bite. Instead, I prefer them alongside other flavors. Like cheese. And meat. And bread. I mean, that makes sense, right?

Seize the last days of fall, get out to the orchard and make some memories. And then make this snack.

I’ve been making these for snacks and dinner parties nonstop since bringing home bags of apples. In this version, I used pecorino cheese. It’s hard, salty and made of sheeps milk, contrasting beautifully with the sweet apples and honey. I also made a version with a good quality blue cheese which was equally delicious. If you can’t find speck, prosciutto will also work well.

2 apples (such as Cortland), cored and cut lengthwise into 1/4 inch slices

Preheat oven to 400 degrees. Arrange the bread pieces in a single layer on a baking sheet. Brush each slice with olive oil and season with salt and pepper. Bake until golden and toasted, about 8 minutes. Remove from the oven.

Top each crostini with a slice of cheese, a slice of apple and a mounded slice of speck. Drizzle honey over the entire platter of crostini and serve.

4 thoughts on “Seize The Last Days of Fall”