I Hope He Liked This Salad 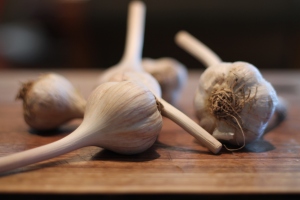 There was quite the line up of impressive chefs on the docket for cooking demonstrations at Garlic Fest in Hutchinson, Minnesota earlier this month. The event is put on by the Sustainable Farming Association of Minnesota in an area of the state where farming is, of course, the way of life. 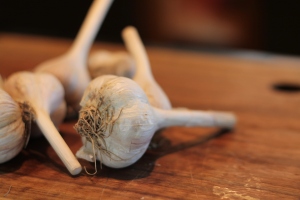 Scheduled to show off his chef skills at noon was Steven Brown. He’s getting nonstop and well-deserved national attention for his Minneapolis restaurant Tilia. The reuben there has ruined me on all other reubens. It’s a fact. 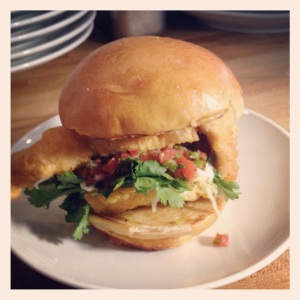 Brown’s Fish Taco Torta was recently robbed in Adam Richman’s search for The Best Sandwich in America on Travel Channel. Robbed, I tell you!

At two pm, Marshall Paulsen from Birchwood Cafe was planning to wow the crowd. Birchwood is consistently called out for creating some of the best eats in the Twin Cities. It’s part neighborhood joint part super creative organic kitchen. It combines into an oh-so-special spot I regularly visit. 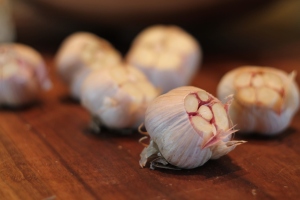 At five, I was asked to wrap up the day.

I mean, I can whip up some tasty dinners. But let’s be real. I possess the cooking skills that reside in the tips of the pinky fingers of those guys. Talk about pressure. 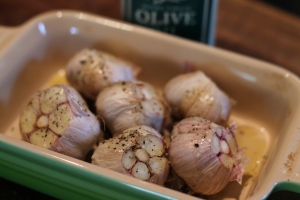 And then there was my audience.

I was invited to participate because of my perspective on home cooking and urban farming. Let me tell you, it’s a pretty humbling experience to talk about the .13 of an acre you use to grow vegetables for yourself in front of people who rely on the land for their livelihood. I mean, if I get a few cucumbers out of my backyard, it’ll save me a few bucks at the grocery store and be a nice addition to my salad. A bad yield for me means a trip to the farmer’s market. A bad yield for a farmer could mean losing everything. 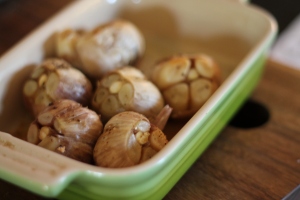 Chef Mary Jane Miller is the cookbook author in charge of the whole deal. She promised to be on stage helping me juggle cooking and chatting. She wanted us to talk about my homesteading-in-the-city efforts, including my worms and of course, the chickens. 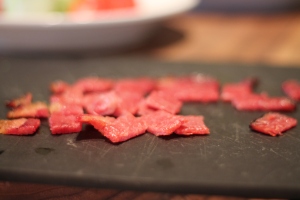 So there I am, arranging my chopped bacon on a cutting board and telling stories about choosing my chicks, naming them and carefully planning every step of their existence. It was in the middle of this diatribe that I noticed a 60-something man sitting in the front row. Wearing a cowboy hat, jeans and a mustache that slightly curled on each end, he sat back in his chair, arms folded, with an amused look on his face. As he shook his head slightly, it was as if I was struck by lightning.

“This guy in the front row here is a real farmer. And I just know, sir, you are looking at me and thinking, ‘this lady is crazy!'” I said to the crowd. He chuckled and nodded. 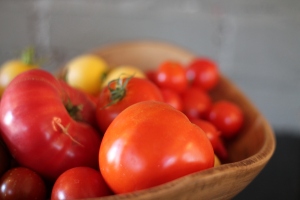 I looked at my next ingredient, the beautifully flawed heirloom tomatoes sitting on the table. And I went on, vocalizing what I was sure was running through this hardworking farmer’s mind.

“She thinks that raising three hens for eggs is some revolutionary concept! And she actually named her chickens!”

The crowd erupted into laughter. So I went on. I told this mostly country-dwelling, farm-living audience that I realize my chicken-raising efforts seem like teeny-tiny small potatoes to them. I explained how I grew up in the suburbs where most children today have no idea that food comes from anywhere but the grocery store. And they certainly don’t have any idea how hard a farmer works or any appreciation for those efforts. And I said exactly how I feel about that fact: it’s a terrible shame. 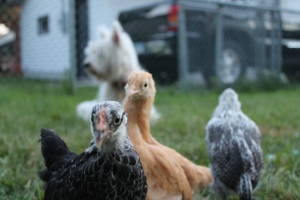 I know my chicken-raising, worm composting, gardening, canning quest is nothing compared to actually depending on the land to keep my family fed and sheltered. But I told that amused farmer and his neighbors that I hope in some tiny way, living the life I’m living and sharing it with others will contribute to the efforts of so many more who are trying to reconnect people with their food. And reconnect those city slickers with the people who grow it. 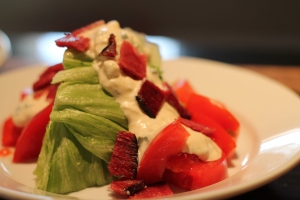 I finished by showing off a plate of that completed salad. Volunteers walked trays of samples through the rows of chairs. They crowd nodded appreciatively as they took bites. I took a deep breath and walked off the stage. And then something pretty amazing happened. That farmer walked up to me and thanked me for my words. I told him he was a great sport and he said I was exactly right when I expressed out loud what he was thinking about me. I don’t know that farmer’s name, what he grows or where he lives. But I will never forget him and that moment. I hope he liked this salad.

To roast the garlic: cut 1/4 inch across the tops of several heads of garlic. Put them in a small baking dish and drizzle with olive oil. Season with salt and pepper. Cover tightly with foil and bake at 350 degrees for about an hour, or until heads are golden brown. Let cool, then push roasted garlic (which by now has a paste-like texture) out of the cloves.

4 pieces of bacon, cooked and chopped

Mix all of the dressing ingredients together and chill.

9 thoughts on “I Hope He Liked This Salad”